RSPCA Medway West  Branch is caring for a staggering  20 extra bunnies – 18 of which are just babies – after they were asked to help an owner who had become overrun with them. 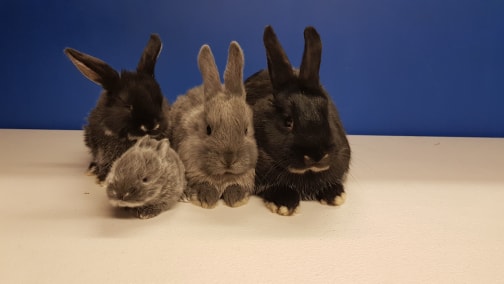 The branch originally took in two adults and three batches of babies (called kittens).  Five of them were four weeks old, five of them were eight weeks old and two were 12 weeks old. Then three days later the female adult (called a doe) gave birth to another six little ones!

The branch will be looking for new forever homes for all the bunnies, and on this World Spay Day (Tuesday 25 February) wanted to highlight to pet owners just how quickly numbers can get out of hand if rabbits are not neutered.

There are several important benefits to neutering your rabbits. If you neuter your rabbits, you not only prevent the risk of unwanted litters, you also reduce the risk of tumours in females and may reduce the incidence of behavioural issues. Un-neutered female rabbits are at a high risk of developing cancerous tumours. In females older than three years of age, incidence of this very nasty uterine cancer may approach 80% and this condition is often fatal.

Does usually give birth overnight or in the early morning and are fertile again virtually as soon as they have given birth. If a male is nearby, the female is likely to get pregnant again and will have a second litter about a month later (they are pregnant on average for around 31 days). 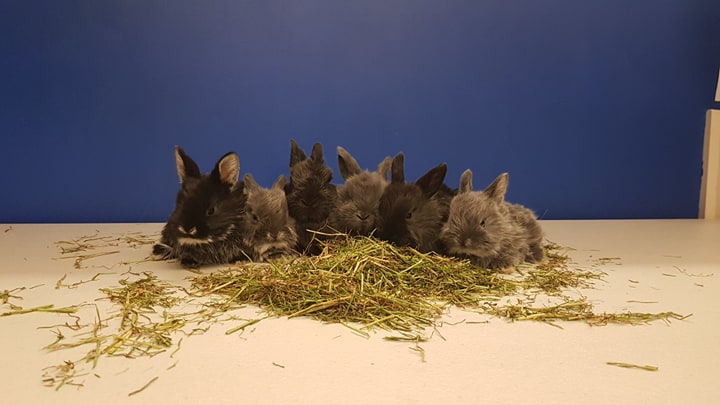 As they tend to give birth overnight, an owner may not realise they have had babies until the morning, but given they can get pregnant so quickly, even if the owner removes the male, the female may already be pregnant again.

The RSPCA branch was asked to help after a rabbit owner in London became overwhelmed by the numbers.

The owner had found two adults and some babies in a box. They took them home and had them checked by a vet and decided to keep them.

But then another two litters of rabbits were born and suddenly, with two adults and 12 babies to care for, they were overrun and asked the RSPCA for help.

A spokesperson for the branch said: “We had agreed to help with this array of rabbits but when they were transferred into our care things were not quite as we had expected. The number of rabbits had grown and there were three groups of babies with another litter about to be born.

“The new babies were born just a couple of days later and so we now have a grand total of 20 rabbits to accommodate! As the old adage goes – they had indeed bred like rabbits.

“Although the female adult, called ‘Jubilee’, possibly wasn’t the mum to all the babies, a female rabbit is quite capable of having litters every 28 -32 days and this shows how easily two becomes 20 or more.”

Staff have named the rabbits after London underground stations, they are mixed breed and all are either black, grey or black otters.

Rabbits are very rewarding companions but have very complex needs so  we would always recommend you do plenty of research before taking on rabbits.

Most rabbits prefer to live with another friendly rabbit, rather than being housed alone, but unless you adopt an established pair they need to be introduced gradually and carefully to avoid fighting.

The rabbits have all been vaccinated and will be neutered dependent on age. If you could offer a rescued bunny a home we would encourage you to contact the branch on 01634 681187. Further guidance on rehoming from the branch is available here

If you are not in a position to rehome an animal but would still like to support the work of the RSPCA Medway West Branch why not consider signing up to become a trustee.

Trustees are vital to the work of RSPCA branches and help to shape the future of the branch and the work in helping animals in the area.