The cat, called Maniek, also had dislocated hocks as result of the horrific cruelty incident

The RSPCA is appealing for information after a beloved pet cat was found with dislocated hocks and 31 sewing needles which had been ‘fired’ into his body. 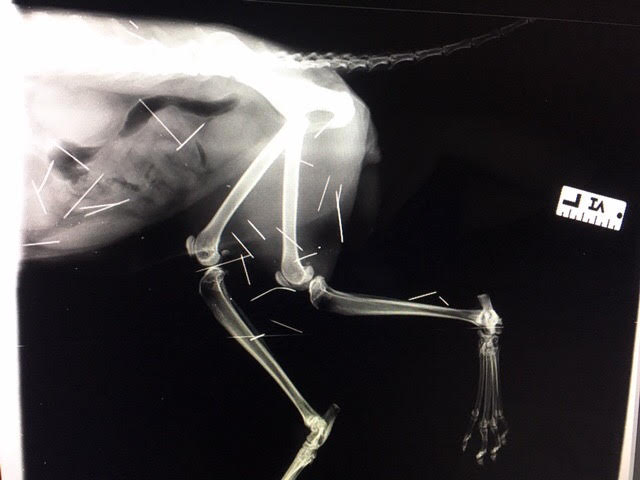 Sadly despite the best efforts of vets to save the poor cat, he had to be put to sleep to end his suffering after he suffered complications as a result of his horrific injuries.

Now the RSPCA is appealing for information to find the person responsible for this deliberate act of cruelty.

The RSPCA was alerted by Celia Hammond Animal Trust who had been treating the five-year-old cat called Maniek.

Maniek had been missing for two days and was then found in a neighbour’s garden in the area of Alington Crescent, Brent, London  on June 22. He was found with injuries to his back leg and at first his distraught owners thought he may have been hit by a car. But when he was x-rayed the 31 needles were discovered peppered in his little body. 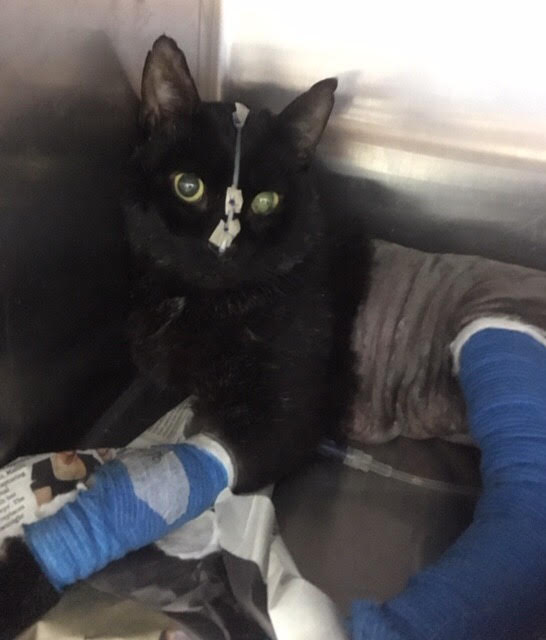 Investigators think that the sewing needles had been fired into the cat by some kind of device which had been adapted. The tops of the needles, which were all different lengths,  had been cut off – an action believed to have been done in order to place them in the device – which at this stage is not known what it could have been.

It is also believed that the cats hocks could have been dislocated by a person holding the cat in order to fire the shots at him or while in the process of the cat trying to get away.

His owners, who do not wish to be named, have been devastated by what has happened to their beloved pet, which sadly was not the first time Maniek had been targeted. In April Maniek had been found on the owner’s roof and was not able to get down after his tail and genital area had been covered in glue.

Serena Holmes, Senior Vet Surgeon at Celia Hammond Animal Trust, said: “When we x-rayed Maniek we were horrified to discover these needles in his body.

RSPCA Inspector Francesca Tambini said: “I am actually horrified to think what poor Maniek has been through, he must have been terrified and in such excruciating pain when this happened.

“It’s likely the injuries to his legs were as a result of being held down while the device fired the needles into his poor little body. It just doesn’t bear thinking about.

“While we don’t know what was used to fire the needles we do think that whatever it was it had been customised for the purpose of using the needles as ammunition.

“It is vitally important that if anyone has any information as to what happened to poor Maniek to contact us.

We need to find the person/persons responsible for this and all calls will be treated in absolute confidence.

“Anyone with information is urged to call me in confidence on the RSPCA inspector appeal line by calling 0300 123 8018.”

She added: “We are also keen to hear from anyone that might have a device of this kind, and hope that they will come forward to let us know, as we would like to establish what type of device it could be. This information will be treated in the strictest confidence and anyone getting in touch will just be helping us as part of the investigation.”