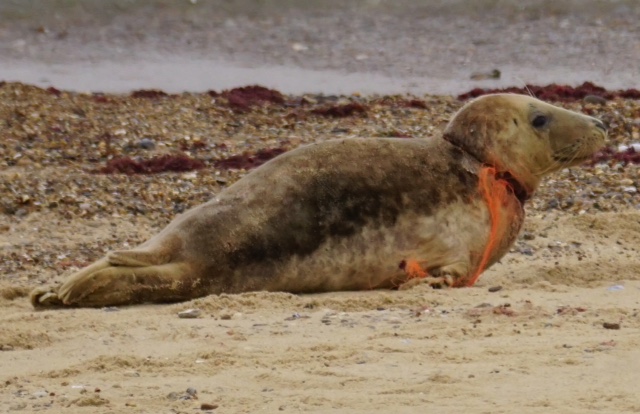 A severely injured juvenile grey seal who was found with orange plastic netting embedded in his neck is being cared for at RSPCA East Winch Wildlife Centre.

It’s now one month since the seal, named Suffolk Punch*, was rescued from Horsey Gap in Norfolk on Friday 11 January,  in a joint operation between local charities Friends of Horsey Seals and Marine and Wildlife Rescue.

The orange plastic netting was embedded in his neck, and like other netted seals that have been rescued, the plastic had caused a deep wound which had become infected.

The centre’s vet managed to cut the netting off the male grey seal and he was given veterinary treatment including antibiotics and pain relief. He has also had regular salt floats for a month, but his recovery is still likely to take a number of weeks or even months.

The wound on his neck is starting to heal and granulate well, but he is still quite thin, so staff are working hard to feed him up. He is now out of the isolation unit and is sharing an outside pool with another seal called Pinkafo, who came into RSPCA care in December after she was found with a pink frisbee embedded in her neck. The pair seem to be enjoying each other’s company..

Alison Charles, centre manager said “It is heartbreaking that this is another seal with plastic related injuries to come into our care.

“We cannot thank the volunteers enough for their efforts in catching these seals, it’s a really difficult task.

“The time it takes for these seals to fully recover from these kind of injuries is usually months, as the wounds are so deep and they require salt floats. Once the wounds are healed the seals will then be released back to the wild.

If you see a seal which looks sick or injured, please keep a safe distance away and call the RSPCA’s emergency line on 0300 1234 999. Seals can have a nasty bite so please keep other animals, such as pet dogs, away from the seal, and never try to return the seal to the water yourself. For more information on what to do with injured wild animals, visit the RSPCA’s website at: https://www.rspca.org.uk/adviceandwelfare/wildlife/injuredanimals

If you would like to help Suffolk Punch and Pinkafo with their recovery you can make a donation here: https://www.justgiving.com/campaign/eastwinchseals