A secret society of yarn bombers, who have created more than 60 toppers on post boxes in Barnet, Brookmans Park and Potters Bar have had an eventful two weeks since they unveiled their beautiful array of hand-crafted Christmas scenes. 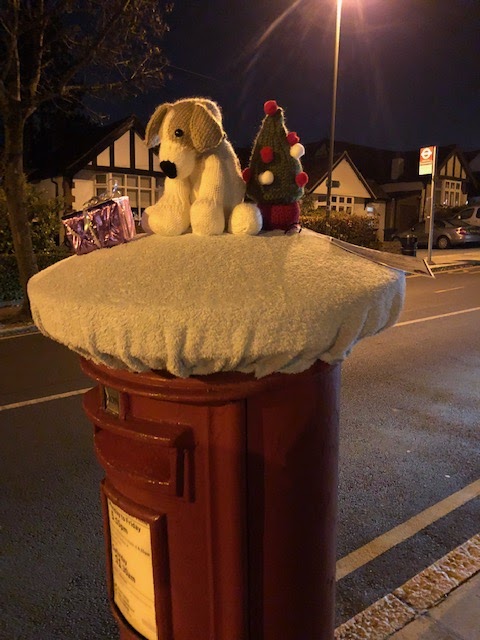 However, despite the setback the knitters’ spirits were lifted thanks to the overwhelming support of the local community.

Thankfully one of the stolen toppers in Barnet was returned, and the knitters got to work quick to create a new topper for the one which was set alight in Cranborne Road, Potters Bar.

The Dog Knits, who are raising money for the Friends of Southridge pensioners scheme, have been touched by all the messages of support including one from the local police in Barnet who said the post box toppers kept them entertained while carrying out their night shift patrolling the streets.The police officers even disturbed two males stealing a motorbike while near post boxes in the area on Alston Road. Unfortunately they didn’t catch the suspects but they did recover the motorbike to keep it safe for the owner to collect. 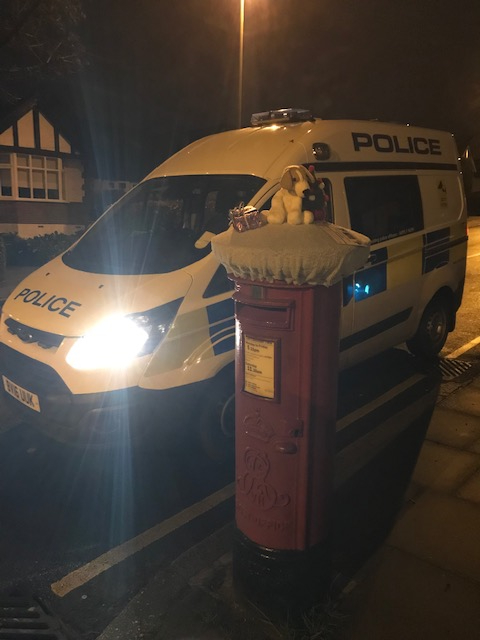 Despite everything that has gone on, the Dog Knits even managed to find time to create a further seven extra toppers which they put on post boxes in the Hadley Wood area, after residents contacted them to say they were sad that they hadn’t got any.

Tina Bishop, spokesperson for the Dog Knits Yarn Bombers, and a member of the Friends of RSPCA Southridge, said: “To say the last two weeks has been eventful for us is an understatement. We’ve had some real highs and lows, but it’s been the support of the local community which has kept us going throughout.

“We are so overwhelmed by the messages of support and the donations so far, and we thank everyone, but we hope that more people can spare a few pounds to continue to support us as we are still a long way off our fundraising target.”

The 12-strong team of yarn bombers have made the toppers to raise money for the RSPCA Friends of Southridge pensioners scheme – which provides funding for sick animals and elderly animals at the centre who require ongoing veterinary treatment through to their twilight years.

The Dog Knits would like to raise £25,000 to run the scheme for another year.

Anyone wanting to make a donation can do so by taking a look at the tag which is on each of the yarn-bombed post boxes. They also have some fun competitions where people can win a prize by taking a selfie of themselves with certain toppers that they find.

Southridge manager Anna White added: “We are so grateful to the Dog Knits Yarn Bombers for all their work in creating these wonderful toppers. They are raising much needed vital funds for animals in our care.

“We hope that this event will also highlight the work of RSPCA Southridge and maybe help to find new homes for the animals in our care. And anyone wanting to find out more about offering a home to one of the animals on this pensioners scheme can contact the centre by calling 0300 123 0704.”

To find out more about the work of the Dog Knit Yarn Bombers you can visit: https://www.dogknitsridge.co.uk/