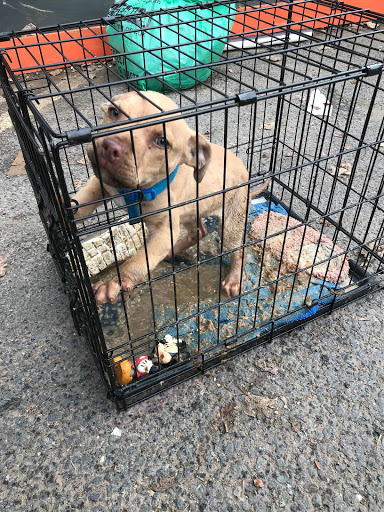 The RSPCA is appealing for information after a tiny pup was found abandoned in a cage outside a front door of a property in Gregory Road, Southall on the morning of Sunday 25 November.

The puppy, believed to be a bull breed cross and only around  10 weeks old, was found shivering and abandoned in a filthy cage.

He was found by a member of the public who called the RSPCA after discovering the little fella at around 8.20am. It is thought he could have been outside in the cold all night.

The pup was collected by RSPCA inspector Dale Grant, who collected him and took him to the RSPCA’s Putney Animal Hospital.

The pup was not microchipped and he was wearing a blue collar.

Inspector Grant said: “This poor little fella is likely to have been left outside all night, and he would have been cold and terrified, not knowing what was happening. The cage was filthy and soaking wet, and inside there was an old slipper and a toy.

“The caller who contacted us had placed a blanket over the cage to keep him a little warmer and sheltered until I arrived to collect him.

“The pup was very smelly, but despite his ordeal quite bright and alert, albeit a bit thin as he only weighed 5kg.

“Thankfully he is now in the care of the staff at RSPCA Putney Animal Hospital and seems to be doing much better, he was given a bath and vaccinated and wormed and staff will continue to monitor him over the next few days.

“The staff decided to call him Grant!

“I am appealing for information regarding this incident and would urge anyone who saw anything suspicious at all to call me on 0300 123 8018.”

This winter the RSPCA is asking the nation to help deliver kindness to all of the animals who don’t have loving families to spoil them this Christmas. Based on the last three winters, the RSPCA expect more than 10,000 animals to be taken into our care this winter.

The RSPCA is asking for animal lovers to help provide a warm, safe bed, food and care to thousands more animals like him who could be facing cruelty, neglect and suffering this Christmas by supporting our campaign Delivering Kindness at Christmas.

This Christmas, the charity is asking the public to support Delivering Kindness at Christmas. To donate, please visit www.rspca.org.uk/giftofkindness.