RSPCA Mid Essex (full name which is RSPCA Essex Mid, Brentwood, Chelmsford and District Branch) was recently presented with a cheque for £750 from a foundation which was set up in memory of the late Holly Clacy. 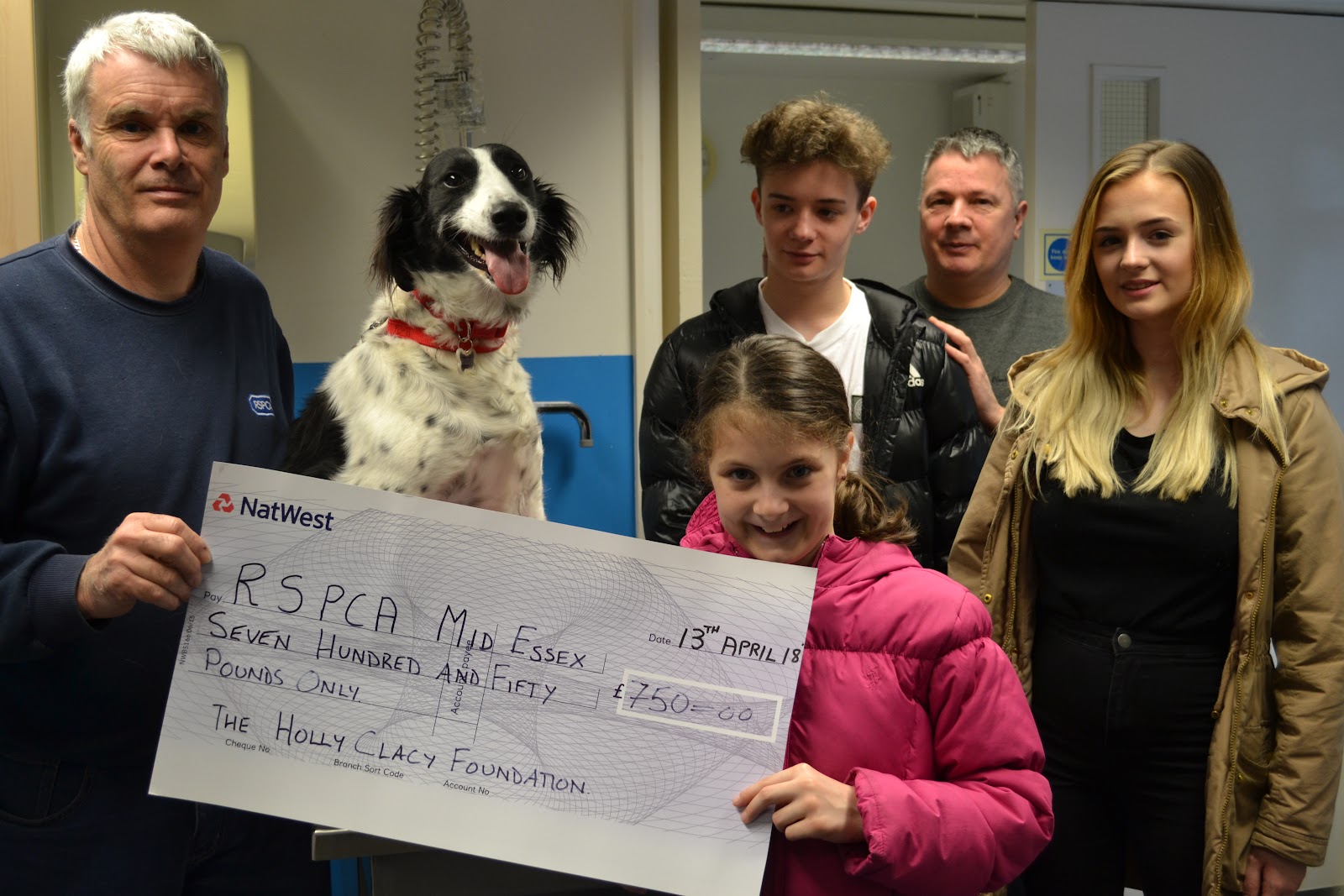 Holly’s father David Clacy said: “Last year on the 20th November 2017 our vibrant, giggly daughter Holly Clacy committed suicide on Radar Hill in South Woodham Ferrers. “There is still no definitive reason as to why she decided to end her life in such a public environment, and for me, the image of finding her alone on that hill still haunts me and always will.

“Our community of South Woodham Ferrers was so touched by her passing that they came together and helped carry hundreds of flowers up to the tree where she ended her life. The community not only gave their grief to support us, but also donated money to the Holly Clacy Foundation which has been set up and is currently seeking charitable status.  In a post on the South Woodham page of Facebook I said that Holly loved animals and part of their donations would be used to give to the local RSPCA.

“Last week, that part of the Foundation’s commitment became a reality when myself, and Holly’s siblings, Etholle 17, Elliott 15 and Lilia aged 9 handed over a cheque for £750. Clive Vallis, Chairman from the RSPCA Mid Essex Branch told us the money would go toward the twenty thousand pounds they need for a new x ray machine.”

Clive Vallis commented: “thank you so much to the Holly Clacy Foundation for the this fantastic sum of money which means we are a step nearer for the branch to raise the funding for a much needed X ray machine to further support the animal welfare work we do at our clinic.”

David Clacy added: “It was a privilege for both myself, and Holly’s mum Lindsay, to use some of the Foundations money toward an excellent cause of which we both know Holly would have been so proud. No amount of money, or words of sentiment, can ever make up the loss we feel and we continue to strive for the truth regarding her last day. Each day that passes gets a little easier but the path is both very long and arduous. Our continued thanks for everyone’s kind wishes and donations that will be used to help others.”

RSPCA Essex Mid, Brentwood, Chelmsford and District Branch (commonly known as RSPCA Mid Essex Branch) is one of around 170 branches which are separately registered charities to the National RSPCA.

Each branch assists the National RSPCA to help rescue animals at risk, neglected, abandoned or being abused in their own area.  The branch relies on public donations, does not receive any government funding and only limited grant funding.

The branch covers the middle region of Essex which includes the city of Chelmsford and surrounding districts such as Brentwood, Billericay, Burnham on Crouch and Maldon.   The branch has a subsidised veterinary clinic in Great Baddow and a charity shop in Moulsham Street, Chelmsford.