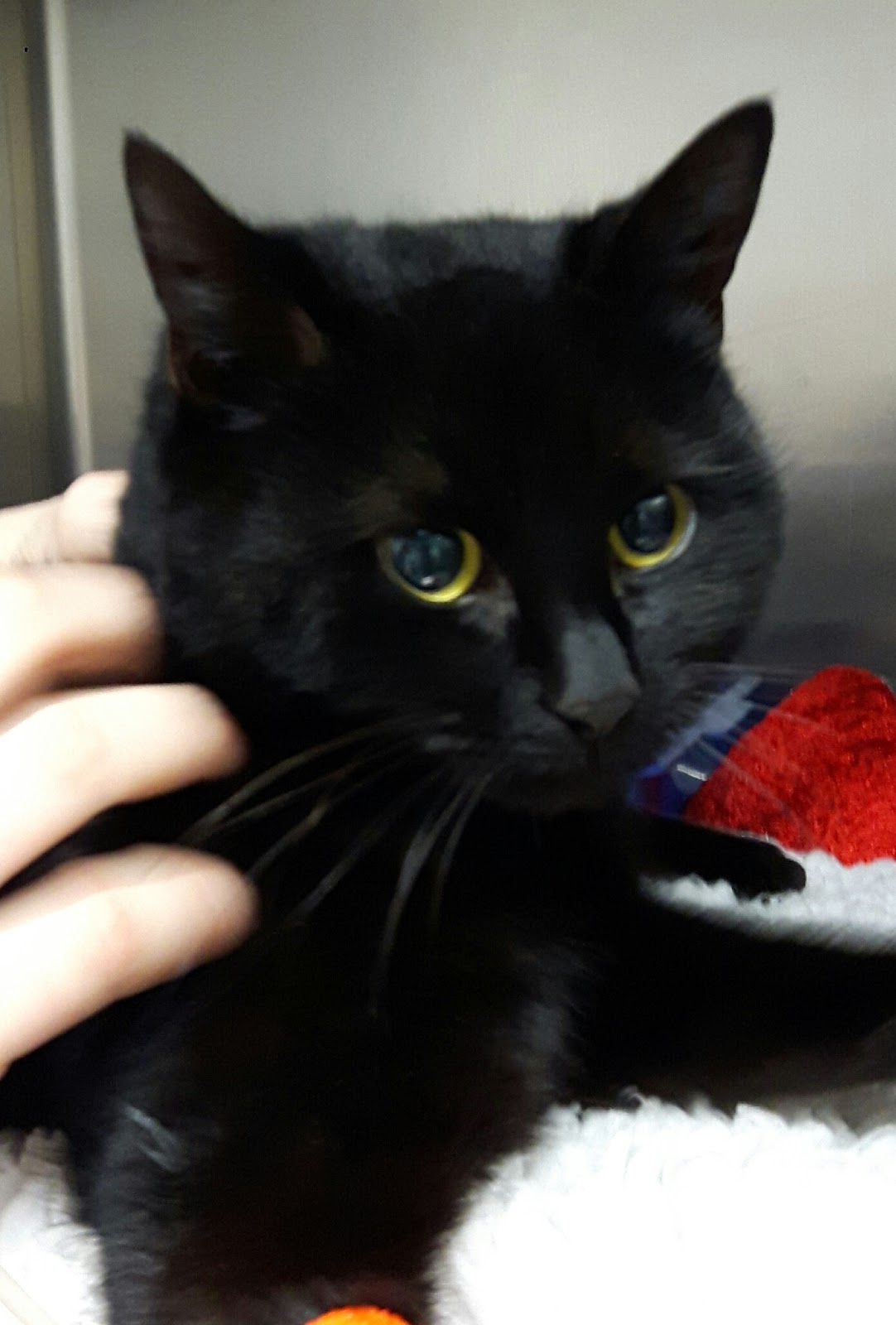 Poor Tinkerbell was found earlier this month by a member of the public in the Neasden area of London and she was taken to the RSPCA Putney Animal Hospital.

Tinkerbell had a complex fracture in her back leg, which required a plate to pin the shattered femur. She is currently on cage rest in order for her injury to heal.

Despite her horrific ordeal Tinkerbell is doing well and staff describe her as a very sweet and affectionate little cat. Sadly she was not microchipped.

Caroline Allen, the director of the RSPCA’s London Hospitals, said: “Poor little Tinkerbell came into us after being found by a member of the public. When we x-rayed her back leg we discovered the pellet.

“It is really upsetting to think that this sweet girl was caused so much pain as a result of someone callously shooting her.

“She has had to have extensive surgery but despite everything she has been through she is still very friendly.  She’s now on cage rest and we hope we can move her to a foster home soon.”

Tinkerbell’s shooting is sadly just one of hundreds of air gun incidents reported to the RSPCA every year. In Greater London last year,  the RSPCA received almost 50 calls in relation to air guns. 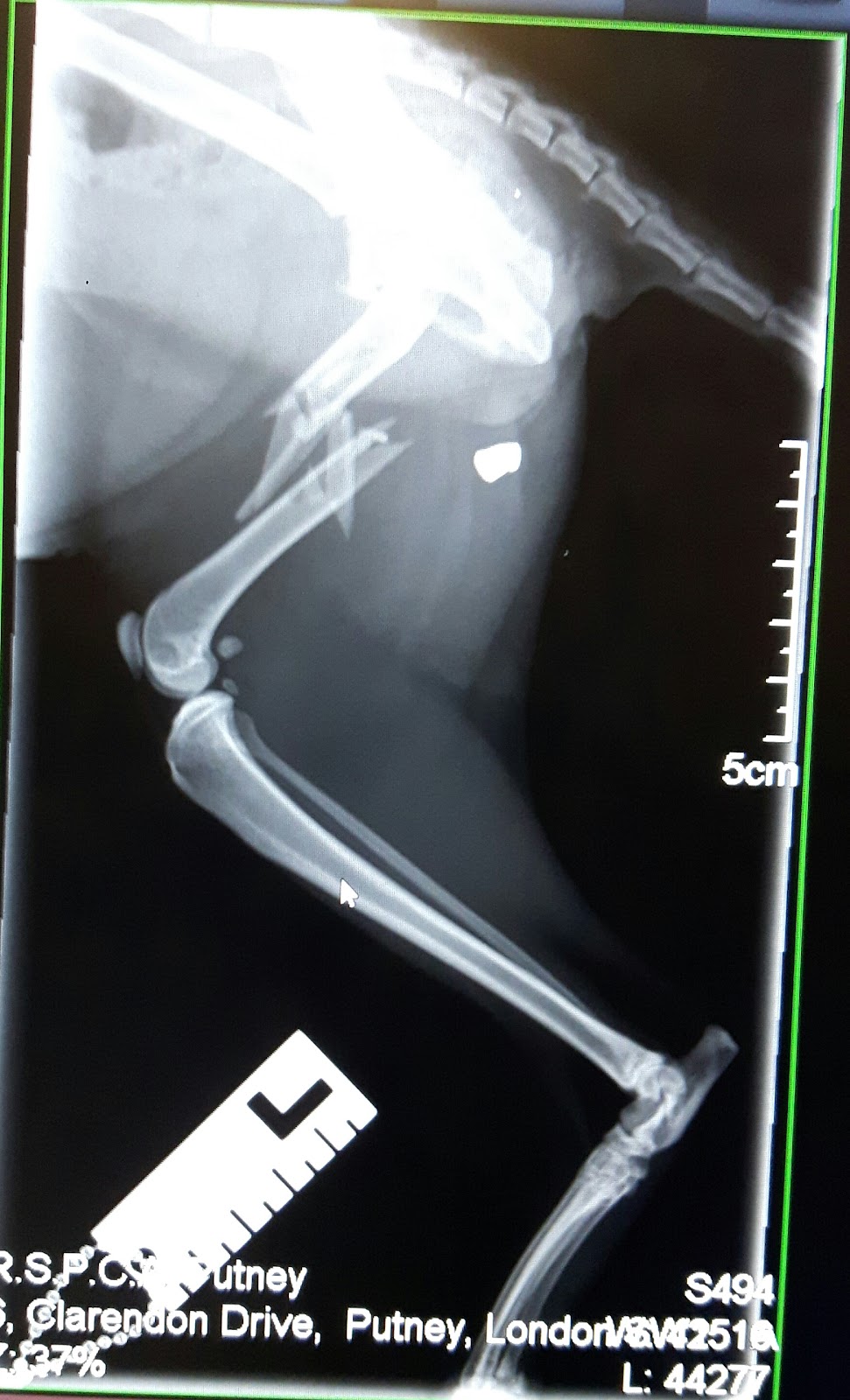 The RSPCA is calling for mandatory licensing of airguns in England and Wales, as it is revealed this week that the charity received 4,500 calls in five years about attacks on animals using such weapons.

Britain’s biggest animal welfare charity will be giving the recommendation as part of a submission to the UK Government’s current review of the regulation of air weapons following two serious incidents involving children.

The RSPCA has received, on average, 900 calls a year since 2013 reporting incidents of animals being targeted by people using air weapons.

Now it wants to see England and Wales follow the lead of Scotland, where airgun owners and users have been required to have a licence since 1 January 2017.

However, in 2017 the RSPCA still received 884 calls reporting air gun attacks on animals across England and Wales. A total of 4,500 reports of air gun attacks were received by the charity from 1 January 2013 to 31 December 2017.

Her Majesty’s Senior Coroner for Suffolk, Dr Peter Dean, wrote to the Home Office requesting a review of legislation covering the use and manufacture of air weapons, following the death of a 13-year-old boy in May 2016 after he was accidentally shot with an air weapon.

David Bowles, RSPCA assistant director of external affairs, said: “The review around the regulation of air weapons is welcomed by the RSPCA and we hope our submission to the Government will help demonstrate the scale of calls to us every year and remind the Government it is important to protect animals as well as people.

“It is heartbreaking that such a tragic incident has sparked this review and our thoughts go out to Benjamin’s family and friends, but we hope that any future regulation of these weapons in England and Wales will better protect people and animals.

“The RSPCA has long been calling for stricter controls over airguns as well as better education and explanation of the law for those buying one. Our 24-hour cruelty hotline receives hundreds of calls every year reporting airgun attacks on animals.

“Animals can suffer horrendous injuries and often die as a result of airgun attacks and these weapons are potentially extremely dangerous for people as well.”

The RSPCA and British Association for Shooting & Conservation plan to stage a joint conference this spring to bring together key stakeholders from industry, the police, animal charities and more to try to identify the scale of the problem and find practical solutions.

The highest number of calls to the RSPCA about air gun attacks in 2017 came from the West Midlands, Kent and Greater London.

The penalties faced if caught deliberately using an airgun to injure an animal can be up to six months in prison and/or an unlimited fine if found guilty under the Animal Welfare Act.

Legislation in Scotland and Northern Ireland requires anyone who possesses, purchases or uses an air weapon to have a licence.

Incidents in which an animal has been shot or targeted by someone using an airgun should contact the RSPCA’s national cruelty line on 0300 1234 999.