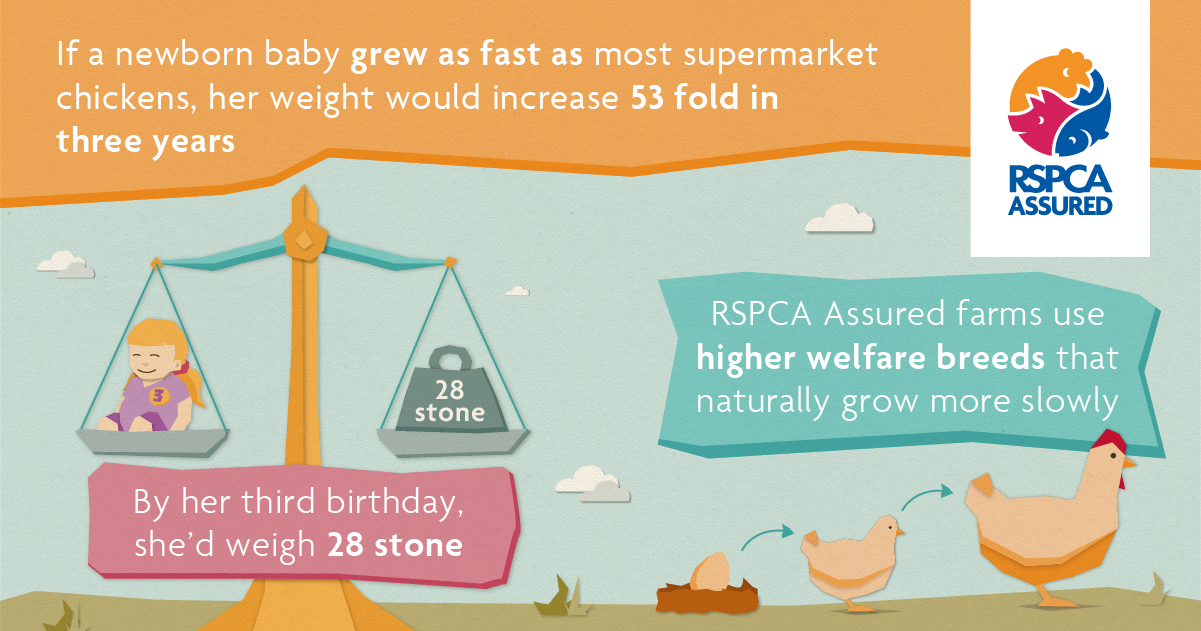 The majority of the 950 million chickens farmed each year in the UK for food are bred to grow so fast millions of them are dangerously heavy for their age, struggle to walk properly and can suffer from heart defects, according to the RSPCA.

The issue – which will be highlighted by Jamie Oliver and Jimmy Doherty on Jamie and Jimmy’s Friday Night Feast (Channel 4, 27 January, 8pm) – is considered the most serious welfare problem facing chickens today according to RSPCA poultry welfare specialist, Kate Parkes:

“If a newborn baby grew as fast as your average supermarket chicken by her third birthday she would weigh 28 stone.

“Growing too fast is a very serious welfare problem. These birds are far too heavy for their skeletons which means they can struggle to walk and suffer heart defects and other health issues.”

Jamie Oliver says: “For me, the basic standard for British chicken should be what’s called ‘higher welfare’, with labels such as RSPCA Assured. If chickens live better lives, we get better-tasting chicken.”

Chickens farmed under RSPCA Assured – the charity’s ethical food label – are bred to naturally grow more slowly which means they are less likely to suffer from leg, heart and other health problems.

“I don’t think people realise just how much these animals are suffering.  And it’s not helped by clever packaging and dubious farm names which can mislead people into thinking they are buying higher welfare chicken when in fact they might not be.”

And the welfare problems don’t end with fast growth rates.  The majority of chickens:

So what can be done about it?

Whilst chicken welfare is a big problem, Parkes says the solution is straightforward:

“Don’t be fooled by the packaging. Put simply if a chicken isn’t labelled RSPCA Assured, free range or organic, the chances are it won’t have been ethically farmed to higher welfare standards.

“We all need to take responsibility to tackle this problem – consumers, supermarkets and the farming industry,” concludes Parkes. “The more people choose ethical chicken like RSPCA Assured, free range and organic, the more supermarkets will stock it.”